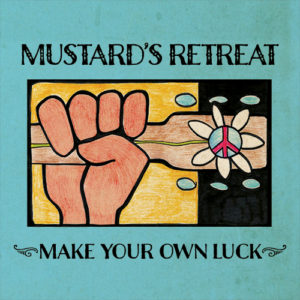 Mustard’s Retreat comes full circle with a new album, new shows, and a return to a trio

Over more than 40 years making music together, Mustard’s Retreat has established a reputation around the region as a talented and entertaining folk duo — two guys and two guitars.

However, the group actually started out as a trio — and for a new album and current concerts, original member Libby Glover has rejoined David Tamulevich and Michael Hough. Her presence brings a whole new dimension to the Mustard’s Retreat sound, yet the transition sounds just like it feels — perfectly natural.

“When David and I first began singing together, something happened. We didn’t have the words to articulate what it was, but we both felt it was important. Then when Libby and David began singing together, something more happened,” Hough says of the group’s 1970s roots. They soon started working as a trio and found a special sound. But life took Glover out of state and Mustard’s Retreat made its reputation as a duo.

“It was always nice, through the years, to come and visit and sit in with the duo,” Glover says. “These are beloved friends, after all; but when I moved back and we did some serious rehearsing together, it was clear that the three-part harmonies were elevating.”

“Michael and I have done very well as a duo, but this adds exponentially in terms of sound and stage presence,” Tamulevich says. “It really is a joy, and that seems like a blessing at this point in our lives, and a gift not to be denied.”

Thankfully, Mustard’s Retreat is now sharing that gift with the rest of us, through a new album, Make Your Own Luck, and an upcoming show at The Ark among their current batch of concert dates.

Glover’s voice certainly does add new depth to the Mustard’s Retreat sound; the harmonies are richer and more intricate. That richness perfectly suits the song selection on the new album, a terrific mix of happy songs and some not-so-happy songs, on topics that may be timeless or extremely current.

“We have always been jarringly diverse as performers, and we have always attempted to put that to work for us instead of making it a problem. This recording is an example of that,” Hough notes. “Making a recording out of all the divergent songs on our list seemed like a psychological obstacle course to me, but with the advice of our producers David Barrett and David Mosher,  we hammered some sense into it. I like the way it flows.”

The lively title track, written by Tamulevich and Hough, is one standout. With a sound fleshed out by drums (Danny Cox) and slide guitar (John Pousette-Dart), the lyrics are both inspiring and down to earth: “Make your own luck if you’re tired and beat / Step up to the plate, swing for the seats / Divine intervention may well be the glue / Make your own luck and luck will find you.”

“The Whisper of the Stars” has its roots in the history of Tamulevich’s family, who migrated to the U.S. from Lithuania in the early 20th century. Its poignant story of poorly treated migrants resonates deeply today. “It was so meaningful and profound to tour in Lithuania, find family that had been estranged since 1929 — hear their stories — hear the story of Lithuania under the Soviets and how they endured and ultimately triumphed and regained their freedom,” Tamulevich says. “And having  David Barrett and David Mosher craft such a beautiful arrangement for the song — it is perhaps my favorite recording of all I have done.”

Hough’s composition “From Short Beach to Long Beach” is about personal artifacts and the memories they contain. “For my songs, I wanted my friends from the Yellow Room Gang (a regional singer-songwriters’ collective) to join me, and they exceeded my hopes on this one. The lovely harmonies by Libby and the stunning intertwining instrumental parts by David Mosher, Jim Bizer, and Rod Capps are a capstone,” Hough says.

“Take the Children and Run” started as a song about Three Mile Island, written in the 1980s by Don Lange. Tamulevich recalled the song and adapted it with new words addressing the Flint water crisis. Glover says, “I was born and raised in Flint in the boom times and I believe our treatment of ‘Take the Children and Run’ is as powerful as any message music can be…and a commitment to our friends in Flint and a promise to NEVER FORGET.”

The album is full of guest appearances by well-known local music figures; in addition to those already mentioned, Annie Capps, Jim Bizer, Jan Krist, and many others also appear. For The Ark show, however, it will be the pure trio sound — just like it was back in the 1970s.

Although a lot of time has passed, the group members find some things remain constant.

“Fans now come back with their kids, and grandkids, who have grown up on our music.  We are an element of nostalgia for them: remembering who they were back when — and it is like family to us. It contributes to the joy we have on stage, knowing that what we have done on recordings and in live concerts has made a difference to people, in the best of ways,” Tamulevich says. “But they also like the newer songs. I think they are a very special community of individuals: thinking, caring, proactive.”

“I see the same faces — I see the same hearts,” Glover says. “I sing the songs and they sing back to me. I give it away; they give it back. Life’s mirror shines bright for me.”

Bob Needham is a freelance writer and the former arts & entertainment editor of The Ann Arbor News and AnnArbor.com.

Mustard’s Retreat’s new album, Make Your Own Luck, is available via the band’s website. They will play The Ark Thursday, July 26; tickets are $20. Details here. The group will also play a free concert at 3 p.m. Aug. 26 in Ann Arbor’s Burns Park, and will play the On the Tracks songwriter showcase in Chelsea on Oct. 3, on a double bill with Kitty Donohoe.