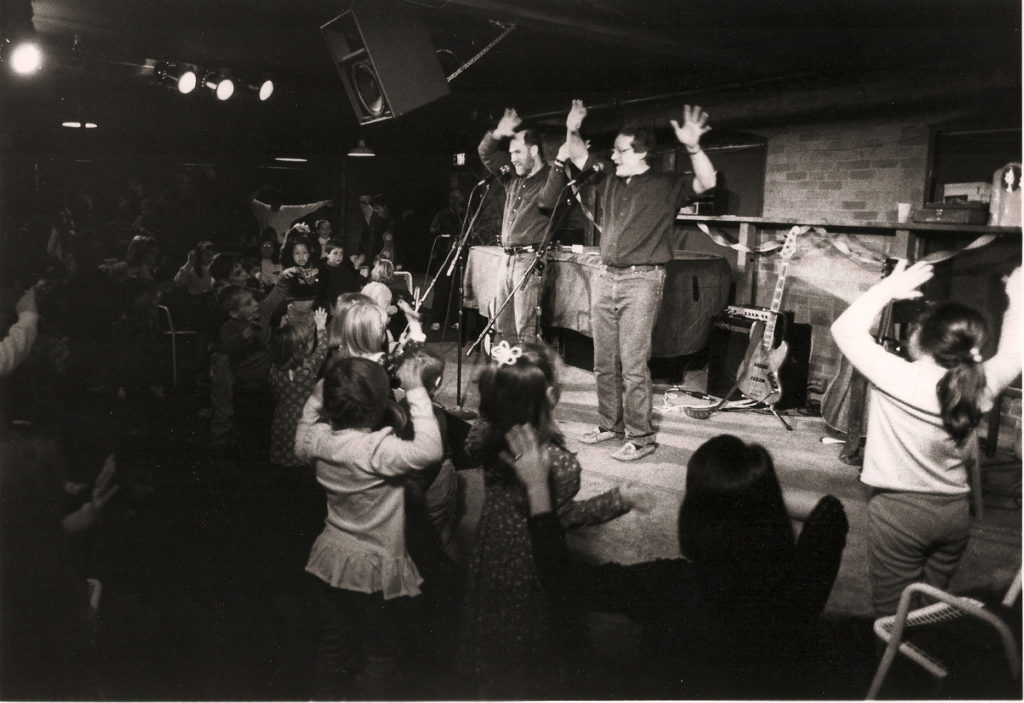 The Mustard’s Retreat show for kids is especially suited for elementary ages, grades 2-5, though it is very adaptable. It basically runs 45-60 minutes, and consists of songs and stories: sing alongs and interactive songwriting and a whole lot of fun!. In addition, Mustard’s Retreat can do songwriting workshops with the students.

“Today’s kids show was pure magic. I can’t wait to work with you again. In twenty-plus years of concert and festival producing I can’t remember a more enthusiastic, focused audience of kids. You captured the kids’ attention right from the beginning and held it for 45 minutes. You had them singing, clapping, and having a great time doing it. Even the stage crew was singing along with you.
..your high energy, genuine warmth, funny songs, beautiful voices, and good spirits still reverberate. In over 25 years presenting music festivals and concerts I have never seen kids react and interact at a children’s program as they did with your specially designed show….You guys were amazing. I have presented Mustard’s Retreat previously in an adult setting, and the songs and harmonies were wonderful. But your kids’ show went even further. I don’t think I have ever seen kids and parents as transfixed as they were at your “Just for Kids” show.
Thank you also for your “show must go on” attitude when midway through your program the skies opened up with the downpour and you guys literally went acoustic off stage under the protective overhang in the plaza and the hundreds of kids went with you, staying to hear the rest of your set.” -Lincoln Center, New York City
“You and Michael have such a nice way with children your songs and stories and interesting and fun and you were able to capture the children’s attention and imagination … Over the past 15 years we have presented over 40 children’s programs and Mustard’s Retreat was the best musical performance we have had.” – Festival on the Green, Middlebury, VT
“Songs, rhymes and stories! Fun and frivolity! Exactly what you’d expect from Mustard’s Retreat; exactly what you’d want for a children’s concert.” -Ann Arbor Summer Festival
“During its ten seasons, the Festival has presented some of the nation’s finest children’s performers. Here in Ann Arbor, Mustard’s Retreat is unsurpassed in their appeal, both to kids and adults. The duo is witty and fun-loving, and in addition to outstanding voices, they possess the singular ability to entice everyone into joining in on imaginative original works and well-know classics. Very few artists have their talent for creating such a warm rapport with their audience.” – The Ark, Ann Arbor, MI
“You gave an outstanding performance that was liked by both our young audience and their families. Since that evening, many people have told me how much they enjoyed themselves. You consistently rise to the high expectations of quality. It shows in the songs you write, your enjoyment of performing, and in the high level of audience involvement you maintain.” – Holly Area Schools
“What an outstanding afternoon..!!!! I’ve heard nothing but positive comments… Needless to say you were a hit! – Leslie Public Schools